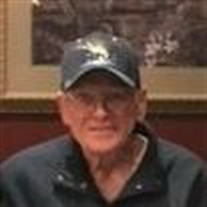 Earl Durgin, 88, of York PA, passed away April 29th, 2022 at his home of 66 years on Vernon Street. He was the last of the original neighbors on his block which earned him the name “The Mayor of Vernon Street”. Earl was born in York PA to Goldie Mae Durgin (Snell) and Walter Sherman Durgin Sr. on February 6th 1934. He attended High School at William Penn and graduated in 1952. Earl is preceded in death by his wife of 63 years, Lorna Dean Durgin (Raffensberger), his parents and his older sister, Jennie Zeigler of Williams, AZ. Earl is survived by his son Sean and daughter-in-law Shawn of York; two grandchildren Kaitlyn and Cassandra; his brother-in-law A.W. “Bill” Raffensberger Jr. and his sister-in-law Eileen of York and his companion Joan McGuigan of York. After graduating high school, Earl apprenticed as a Tool and Die maker at Quality Engineering and Tool Company, Inc from 1953 to 1954. He then worked for Allis-Chalmers and then went on to KBA Motter Printing Press Company. He worked at KBA Motter (Later known as KBA North America) for 33 years and retired from there as a Forman in 1999. While at KBA Motters, Earl also worked part time at Sears Roebuck installing custom draperies in Customers’ homes in the evening after work. Earl had a passion for hunting and fishing. He loved deer and turkey hunting with his good friends from Burnt Cabins, PA – Jim, Dick, Randy and Mike. He also loved trout fishing with his friends Dave and George and they could often be found at the Yellow Breeches. Earl belonged to the Yellow Breeches Fishing Club. He was also a member of the York Postcard Club along with his wife, Lorna. Earl collected York, PA postcards and was especially fond of old postcards depicting the early buildings, churches and firehouses of York. Earl served in the United States Navy from 1956 to 1960. He was extremely proud of serving in the Navy with his last duty assignment being on board the USS Amphion. Later on in life, it was rare to find Earl not wearing his United States Navy ball cap. Earl had a perpetual sense of humor that put a smile on many faces over the years. Even as his health failed which led to hospital and rehab stays, Earl maintained his sense of humor despite what he was going through. Another of his qualities was his generosity and willingness to help others. Whenever and whatever the circumstance was, Earl was always there for his Family, Friends and Neighbors. In lieu of flowers, memorial donations may be made to the Yellow Breeches Anglers and Conservation Assn., 437 Stought Rd, Carlisle, PA 17015. The family wishes to extend their sincere gratitude to the staff at Misericordia Nursing and Rehab for their care of Earl during his recent stay there. The Family would also like to express their heartfelt gratitude to The Visiting Angels, and Grane Hospice for their care of Earl during the last 2 weeks of his life. Lastly, Earl’s family would like to say thank you to all of his Neighbors who have gone above and beyond to help him during his time of need. A viewing and memorial service will be held at Salem Christian Church, 24 Franklin Street Jacobus, PA on May 5th with Pastor Kevin Becker officiating. The viewing will begin at 10:00 AM followed by the memorial service at 11:00 AM. Burial will follow at Susquehanna Memorial Gardens with graveside military rites conducted by the York County Veterans Honor Guard. Arrangements by the Etzweiler Funeral Homes and Cremation Service, 1111 East Market Street, York, PA 17403.

Earl Durgin, 88, of York PA, passed away April 29th, 2022 at his home of 66 years on Vernon Street. He was the last of the original neighbors on his block which earned him the name &#8220;The Mayor of Vernon Street&#8221;. Earl was born in... View Obituary & Service Information

The family of Earl Durgin created this Life Tributes page to make it easy to share your memories.

Send flowers to the Durgin family.