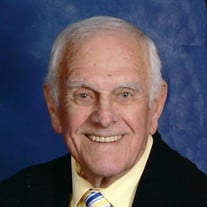 Earl F. Brunk, Jr., 88, of York died Tuesday, April 19, 2022 at his residence. He was the husband of Patricia (Crawford) Brunk. Earl and Pat were married on June 25, 1955 and would have celebrated their 67th wedding anniversary this year. Born March 5, 1934 in York, he was the son of the late Earl F. and J. Luella Brunk. Earl served in the U.S. Army. Earl was a 1952 graduate of Dover High School and graduated in 1961 from the University of South Carolina with Cum Laude Honors. He was a member of Tau Beta Pi Honor Society and the American Society of Mechanical Engineers (ASME). He also attended Penn State University and Johns Hopkins University. Earl worked for several years at Borg Warner International, which is where he met his wife, Pat. He retired from AMP after 26 years of employment as a Mechanical Engineer. Earl was a member of Eastminster Presbyterian Church where he sang in the church choir for many years, served as a Trustee and was on the Buildings and Grounds Committee. He volunteered with Habitat for Humanity and was a Boy Scout Leader. Earl was a lifetime member of Windy Hollow Hunting Camp and a member of Hawk Gunning Club. He enjoyed traveling with Pat and they traveled to all 7 continents of the world and almost all of the 50 United States. Earl was a man with a strong faith and was very devoted to his wife, Patricia and family. He enjoyed playing volleyball and Aggravation. He often said that he could “fix anything” and enjoyed helping family and neighbors with handyman projects. In addition to his wife, Earl is survived by his 2 daughters, Pamela Krout and husband Dean Krout of York, PA and Lisa Dvoryak of York, PA; son, Scott Brunk and wife Vicky Brunk of Lewes DE; 6 grandchildren, Dustin Krout and fiancé Alyssa Miller of York, PA; Jeremy Heilman and wife Stephanie of Schwenksville, PA; Stacey Heiden and husband Jordan of Haddonfield, NJ; Leah Miller and husband Josh of Airville, PA; Tyler Brunk and wife Madison of Nazareth, PA; and Kelly Reynolds and husband Robert of Richmond, VA; 9 great grandchildren, JJ, Bristol, Nathan, Kasen, Asher, Sutter, Bodie, Brady and Ellie; 3 nieces, Sharon Brunk of Dover, Linda Fickes Conner of Santa Rosa, CA and Steph Paul of Dillsburg, PA; and 2 nephews, Wayne Fickes of Florida and Dennis Brunk of York, PA. Earl was preceded in death by his parents; 3 brothers, Durwood Brunk, Weldon Brunk and Billy Brunk; a sister, Annie Fickes; and 2 nephews, Donny Fickes and Rodney Brunk. Funeral services will be held Wednesday, April 27, 2022 at 10:30 a.m. at Eastminster Presbyterian Church, 311 Haines Road, York with his pastor, the Rev. Joshua D. Gill, officiating. Burial will be in Susquehanna Memorial Gardens with a Flag folding and Taps presentation by the York County Veterans Honor Guard. Viewings will be held Tuesday, April 26, 2022 from 6:00-8:00 p.m. at the Etzweiler Funeral Homes and Cremation Service, 1111 E. Market Street, York and Wednesday from 9:30-10:15 a.m. at the church. In lieu of flowers, please send memorial contributions to Eastminster Presbyterian Church, 311 Haines Road, York, PA 17402 or to the Children’s Miracle Network, Penn State University Development, Attn.: Children’s Miracle Network, P.O. Box 852, Hershey, PA 17033. Arrangements by the Etzweiler Funeral Homes and Cremation Service, 1111 E. Market St. York, PA 17403.

Earl F. Brunk, Jr., 88, of York died Tuesday, April 19, 2022 at his residence. He was the husband of Patricia (Crawford) Brunk. Earl and Pat were married on June 25, 1955 and would have celebrated their 67th wedding anniversary this year.... View Obituary & Service Information

The family of Earl F. Brunk Jr. created this Life Tributes page to make it easy to share your memories.

Send flowers to the Brunk family.