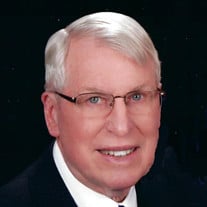 Donald R. Monroe, 86, of York died Saturday, December 11, 2021 at Autumn House-East. He was the husband of Shirley (Gross) Monroe. They were married for 64 years on February 2, 2021. Born August 27, 1935 in Lower Chanceford Township, York County, he was the son of the late T.B. Reed and Olive (Harvey) Monroe. Donald served in the U.S. Army from 1955-1957. He was a logistics planning analyst for Caterpillar. He retired in 1992 with over 40 years of employment. Donald was a 1953 graduate of William Penn Senior High School. He was a member of Kreutz Creek Presbyterian Church. Donald was a former member of Calvary United Presbyterian Church where he was an elder, deacon, and treasurer. He served as the financial secretary. Donald was also on the Presbytery Committee for the Donegal Camp and Conference Center. He was also a former member of First Presbyterian Church of York. Church was very important to him and he volunteered in many aspects of the churches. He was awarded the Perfect Attendance award at church. Donald enjoyed woodworking and doing self-projects around the house. He also volunteered for 10 years at Manor Care Health Services-Dallastown. In addition to his wife, Shirley, he is survived by his son, Rev. Timothy R. Monroe (Roberta) of Blairsville, PA; his daughter, Tamela M. Bourne (Marko)of New Freedom; a grandson, Ian Bourne; a sister, Helen Smith Bolin of Bradenton, FL; and a nephew and several nieces. He was preceded in death by his brother, Wilmot Monroe and two sisters, Erma M. Frey and Mildred R. Myers. Funeral services will be held Saturday, December 18, 2021 at 10:30 a.m. at the Etzweiler Funeral Homes and Cremation Service, 1111 E. Market Street, York with his son, the Rev. Timothy R. Monroe, officiating. A viewing will be held Saturday from 9:30-10:30 a.m. at the funeral home. The funeral service will be livestreamed for those that are unable to attend. Please visit Donald’s tribute page on the funeral home website (www.etzweilerfuneralhome.com) to view the livestream. A private burial will be held at Mount Rose Cemetery on Monday. In lieu of flowers, memorial contributions may be made to Kreutz Creek Presbyterian Church, 85 Old Church Lane, York, PA 17406 or to First Presbyterian Church of York, 225 East Market Street, York, PA 17403. Arrangements by the Etzweiler Funeral Homes and Cremation Service, 1111 E. Market St., York, PA 17403.

The family of Donald R. Monroe created this Life Tributes page to make it easy to share your memories.

Send flowers to the Monroe family.