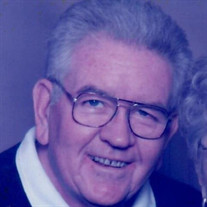 DeHaven V. Speicher, age 82, of York, died peacefully at ManorCare-York South, on Wednesday, February 10, 2021. Born in Reading, PA on October 21, 1938, he was the son of the late Alvin and Sarah (Mattis) Speicher. DeHaven was the loving husband and best friend of Betty J. (Bosley) Speicher with whom he shared 58 years of marriage. DeHaven was a 1956 graduate of William Penn Senior High School where he was a member of the Bearcat’s golf team, helping them to win the Central Pennsylvania Golf Championship in 1956. Following high school, DeHaven proudly served his country in the United States Air Force beginning in 1956 and was honorably discharged in 1960. Following his time in the Air Force, he became a printing pressman at Standard Register Company, retiring after 40 years of service. DeHaven was a longtime member of Advent Lutheran Church. He also was an avid golfer and member of the “Grandview Group” who played regularly for many years at Grandview Golf Club, and he particularly enjoyed his time playing at York’s Honey Run Golf Club with his son David. He loved family vacations every year in Myrtle Beach, SC and found time to hit the links there as well. Above all, DeHaven loved to spend time with his family, and he especially cherished times with his grandchildren. In addition to his wife, DeHaven is survived by his daughter Beth A. Petit de Mange, and her husband Michael of Dover, DE, his son David Speicher, and his wife Donna of Old Bridge, NJ, his sister Mary Fields of York, his grandchildren Ben, Aimee, Brandi, and Michael, and his great-grandchildren Julianna and Zachary. He was preceded in death by his brother Alvin Speicher and his sister Shirley Beckmeyer. A memorial service to celebrate DeHaven’s life will be held at 11:00 a.m. on Saturday, February 27, 2021 at Advent Lutheran Church, 1775 East Market Street, York, with the Rev. Dr. Constance Mentzer officiating. There will be a visitation at the church prior to the service from 10:00 to 11:00 a.m. All those attending the service are asked to wear a mask and observe social distancing guidelines. In lieu of flowers, contributions in DeHaven’s memory may be made to Advent Lutheran Church, 1775 East Market Street, York, PA 17402. DeHaven’s family would like to thank the nurses and staff at Autumn House East and ManorCare – York South for the loving and attentive care shown to DeHaven. The family would especially like to thank all of their wonderful neighbors and friends for all of the love, help, and support provided through the years. Arrangements by the Etzweiler Funeral Homes and Cremation Service, 1111 East Market Street, York, PA 17403.

DeHaven V. Speicher, age 82, of York, died peacefully at ManorCare-York South, on Wednesday, February 10, 2021. Born in Reading, PA on October 21, 1938, he was the son of the late Alvin and Sarah (Mattis) Speicher. DeHaven was the loving husband... View Obituary & Service Information

The family of DeHaven V. Speicher created this Life Tributes page to make it easy to share your memories.

Send flowers to the Speicher family.