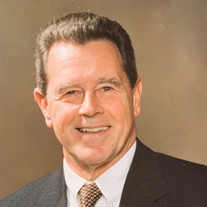 David Lee Ruppert, 81, of Spring Grove, Jackson Twp., entered into rest September 2, 2020 at Country Meadows-West in York, PA. He was the husband of Barbara (Zech) Ruppert. They were married 61 years. Born February 25, 1939 in York, he was the son of the late Coit D. and Sara (Detter) Ruppert. Dave graduated from William Penn Senior High School in 1957. He graduated, with distinction, in Mechanical Engineering from Penn State University in 1961. While there, he played 1st trumpet in the prestigious Blue Band. He then worked for Armstrong Corporation in Lancaster, PA. In 1963, he returned to Penn State and earned a Master of Science degree in Mechanical Engineering. From 1965-1967, he was employed by Martin Company in Baltimore, MD. Dave had a private pilot’s license, and upon hearing about the great need for commercial pilots on a nightly news program, he made the decision to change careers and began flight training in Denver, Colorado with United Airlines. He flew for United Airlines for 32 years – 12 as a Captain. He loved his job, but had to retire at the mandatory age of 60. His favorite destination was Munich, Germany, and as he was fluent in the German language, he spent many layovers there. The family enjoyed many trips to Europe and the British Isles, as well as many U.S. destinations. Dave was Captain on many flights with his family as passengers. After retirement, Dave was a part-time corporate pilot for P.H. Glatfelter in Spring Grove for several years. Dave was a member of: Airline Pilots Association (ALPA), AOPA, Retired United Pilots Association (RUPA), the Izaak Walton League, NRA and the Out Door Country Club, as well as Chairman of Jackson Township Sewer Authority for several years, His interests included European Travel, hunting with his son and Bluegrass with his daughter. He was an avid gardener, a loving father and grandfather, and he loved his many cats over the years. On his last flight from Munich, Germany, before take-off, a fire truck sprayed an arc of water (called a water cannon salute) over the 767, which is a tradition for a retiring pilot. All of the passengers on that flight signed a card wishing him well in their own language. He will be greatly missed by all who knew him! In addition to his wife, Dave is survived by a daughter, Kathy L. Ruppert Sargen and her husband, Richard (Rick) Sargen of York; a son, Bradley J. Ruppert and his wife, Jessica; and grandson, Lane Ruppert of York. He is also survived by a brother, Jim Ruppert and his wife, Liz and nephew, Jimmy of Atlanta, GA. A graveside service will be held at Salem Union Cemetery, 2705 West Canal Street, Dover, PA on Friday, Sept., 11, 2020 at 11:00 a.m. with his pastor, the Rev. Kevin T. Shively, officiating. Friends and family should meet at the cemetery by 10:50 a.m. on Friday. Due to the Covid19 restrictions, you may wish to bring a lawn chair to the cemetery. In lieu of flowers, memorial contributions may be made to the Greater PA Chapter of the Alzheimer’s Association, 225 N. Michigan Ave., Fl. 17, Chicago, IL 60601 or to St. Matthew Lutheran Church, 839 W. Market St., York, PA 17401 or to the SPCA of York County, 3159 Susquehanna Trail North, York, PA 17406. Arrangements by the Etzweiler Funeral Homes and Cremation Service, 1111 E. Market St. York, PA 17403.

David Lee Ruppert, 81, of Spring Grove, Jackson Twp., entered into rest September 2, 2020 at Country Meadows-West in York, PA. He was the husband of Barbara (Zech) Ruppert. They were married 61 years. Born February 25, 1939 in York, he was... View Obituary & Service Information

The family of David Lee Ruppert created this Life Tributes page to make it easy to share your memories.

Send flowers to the Ruppert family.