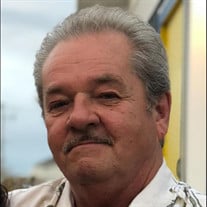 Dale E. Herman, age 75, of Emigsville, died peacefully on Monday, September 6, 2021. Born in York on January 20, 1946, he was the son of the late Kenneth Herman and the late Hazel (Anderson) Crimmins. Dale was the loving husband of Dea (Gunsch) Herman, they were married July 30, 2006. Dale was a graduate of William Penn High School. He also served his country in the US Army. Following his military service, he went to work for Caterpillar, Inc., where he worked for many years, retiring when Caterpillar left York. In retirement he took a job as the sexton for St. John Episcopal Church in York and served the church for many years. Later in life he worked part-time for RS Automation, Inc. out of Emigsville. Dale was known for his generosity, helping others and spending time with friends and family. He was an avid New England Patriots fan and enjoyed collecting sports memorabilia. When his children were younger, he was a scout leader for the Boy Scouts of America, Troop #57 in Manchester and he was also a volunteer for Adults & Children with Learning & Developmental Disabilities. Dale has always enjoyed cooking, but later in life he was known as a movie buff because he loved to collect movies and watch them with family and friends, especially his grandchildren. In addition to his wife, Dale is survived by his son Bradley Scott Herman, and his wife Stacey, his step-daughter Nicole Cramer, and her husband Ed, his grandson Seth Michael Herman and his granddaughter Aleister Oldhouser. He is also survived by his siblings Shirley Day, John Herman Sr., Barry Herman, Barb Boll, and Patsy Kirkessner and many nieces, nephews, and friends. Dale was preceded in death by his beloved daughter Kimberly Renee Herman, and his siblings Norma Livingston, Walter Herman Sr., Ronald Herman Sr., and Tommy Herman. A memorial service to celebrate Dale’s life will be held at 2:30 pm on Saturday, September 25, 2021 at St. John Episcopal Church, 140 North Beaver Street, York. In lieu of flowers, contributions in Dale’s memory may be made to the Juvenile Diabetes Research Foundation at www.jdrf.org or Adults & Children with Learning and Developmental Disabilities at www.ACLD.org. Arrangements by the Etzweiler Funeral Homes and Cremation Service, 1111 East Market Street, York, PA 17403.

Dale E. Herman, age 75, of Emigsville, died peacefully on Monday, September 6, 2021. Born in York on January 20, 1946, he was the son of the late Kenneth Herman and the late Hazel (Anderson) Crimmins. Dale was the loving husband of Dea (Gunsch)... View Obituary & Service Information

The family of Dale E. Herman created this Life Tributes page to make it easy to share your memories.

Send flowers to the Herman family.