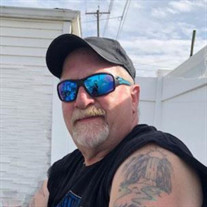 Craig Lee Witman, 62, of York died October 25, 2020 at his home. He was the husband of Terri (Tucker) Witman. They were married for 16 years on April 20, 2020. Born June 18, 1958 in Beaufort, S.C., he was the son of Carole (Kuhns) Bradfield of York and the late Clair “Butch” Witman. He was the step son of David Bradfield of York. Craig was a Tool and Die Maker and retired after 37 years of employment from New Standard Corp. He was also a Constable for Manchester Township for 6 years. He was a 1976 graduate of York Vo-Tech. Craig was a member of the Liberty Social Club, American Legion Pleasureville Post 799, and the NRA. He enjoyed riding his Harley, working in his garden, and spending time with his family, especially his grandchildren. Craig was political and opinionated. In addition to his wife, mother, and step father, Craig is survived by his grandchildren, Daughton, Kelen, and Cameron Allison; son-in-law, Elijah Allison; brother, David Bradfield, II (Linda); sisters, Lori Cummings (Kevin) and Vicki Jacoby; step sisters, Kathy Schachle, and Cindy Gibbony (Blair); and step brothers, Dennis (Cookie), Barry, and Dirk Bradfield. Craig was preceded in death by his step daughter, Angela Allison; 2 step sisters, Jackie Myers and Karen Hinze; and step mother, Geraldine Witman. Funeral services will be held Monday, November 2, 2020 at 2:00 p.m. at the Etzweiler Funeral Homes and Cremation Service, 1111 E. Market Street, York. Burial will be in Prospect Hill Cemetery. A viewing will be held Monday from 1:00-2:00 p.m. at the funeral home. The funeral service will be streamed to Craig’s tribute page on the funeral home website at www.etzweilerfuneralhome.com and will be available to be viewed immediately following the service. In lieu of flowers, memorial contributions may be made to the SPCA of York County, 3159 Susquehanna Trail North, York, PA 17406 or to the Wounded Warrior Project, P.O. Box 758516, Topeka, KS 666751-8516. Arrangements by the Etzweiler Funeral Homes and Cremation Service, 1111 E. Market St., York, PA 17403.

The family of Craig Lee Witman created this Life Tributes page to make it easy to share your memories.

Send flowers to the Witman family.