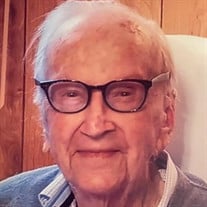 Charles C. “Charlie” Innerst, 97, of York died January 21, 2021 at York Hospital. He was the husband of the late Mary K. (Philips) Innerst who died in 2009. Born February 21, 1923 in Pleasureville, he was the son of the late Morgan C. and Edna L. (Kindig) Innerst. Charlie was a veteran of the U.S. Army. He served in WWII in the Central Pacific-Mariana Islands (Saipan) in 1944 and in Korea from 1950-1952. Charlie was employed in Motor Freight Transportation for 45 years where he held sales and sales management positions with several companies. These companies include: York Motor Express, Hall’s Motor Transit Company, Mason and Dixon Lines, Mushroom Transportation, and Kerek Air Freight. Charlie was a 1940 graduate of William Penn Senior High School and Thompson Business College. He was a long time member of St. Peter’s Lutheran Church. He was a member of several transportation related organizations. He was a life member of both the York Traffic Club where he served as President in 1966 and the Lancaster Traffic Club where he also was President in 1980. Charlie served as Chairman of the Pennsylvania Motor Truck Association Sales Council in 1970. Charlie is survived by sons, Charles C. Innerst III and his wife, Johnna of Dover, Stephen D. Innerst and his wife, Sandy of York, James M. Innerst of York, and Philip J. Innerst of York; daughters, Cheryl A. Oeschger and her husband, Pete of Stevens, PA, Joan M. Geisler and her husband, Rick of York, and Jane L. Cole and her husband, Rick of Bear, DE; 8 grandchildren, Melissa, Chad, Jennifer, Amber, Tiffany, Sean, Matt, and Michelle; 11 great grandchildren; a brother, Ken Innerst and his wife, Joyce of York and several nieces and nephews. Charlie was preceded in death by his brother, Preston Innerst and sister, Norma Jean Baker. Private graveside services will be held at Mount Zion Cemetery in York with military honors conducted by the York County Veterans Honor Guard. Officiating will be his pastor, the Rev. Beth Schlegel. In lieu of flowers, memorial contributions may be made to St. Peter’s Lutheran Church Memorial Fund, 947 N. George Street, York, PA 17404. Arrangements by the Etzweiler Funeral Homes and Cremation Service, 1111 E. Market St. York, PA 17403.

The family of Charles C. "Charlie" Innerst created this Life Tributes page to make it easy to share your memories.

Send flowers to the Innerst family.