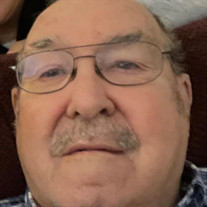 Charles D. Eisenhart, 82 of York, PA, died at his residence on March 9, 2021. He was the husband of Florence “Fae” A. (Ehrman) Eisenhart with whom he observed their 38th wedding anniversary on July 18, 2020. Born July 12, 1938 in York, PA, he was the son of the late Robert and Bertha (Wallick) Eisenhart. Charles was a U.S. Army veteran of the Vietnam War. He was formerly employed in the composing department for the York Newspaper Company. Charles was a member of Fourth United Methodist Church where he was very active over the years, including serving as the treasurer for the church for many years. Charles also served as treasurer for the Fourth U.M.C. Early Learning Center. He was a former Boy Scout leader, avid bowler and loved camping, travel and outdoor life. In addition to his wife, Charles is survived by his children, Daniel Eisenhart of Hanover, PA, Karen A. Eisenhart of Edinboro, PA, Steven Eisenhart and his wife Tamara of Poulsbo, WA, Heather A. Clark and her husband Daniel M. of Rising Sun, MD and Erica Williams of Temple, TX; ten grandchildren, four great grandchildren and two sisters, Elsie Noel of South Carolina and Peggy Dietz of South Carolina. A funeral service will be held Friday, March 19, 2021 at 11:00 a.m. at the Etzweiler Funeral Homes and Cremation Service, 1111 E. Market St. York, PA. Burial will be in Prospect Hill Cemetery. A viewing will be held from 10:00-11:00 a.m. Friday at the funeral home. In lieu of flowers, memorial contributions may be made to Fourth United Methodist Church, 28 N. Lehman Street, York, PA 17403. Arrangements by the Etzweiler Funeral Homes and Cremation Service, 1111 E. Market St. York, PA 17403.

The family of Charles D. Eisenhart created this Life Tributes page to make it easy to share your memories.

Send flowers to the Eisenhart family.