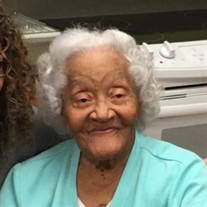 Carrie Virginia McCoy Smith, 99, of Harrisburg transitioned into eternal life on Thursday, July 30, 2020 at Frey Village in Middletown. She was born March 11, 1921 in Bennettsville, South Carolina, daughter of the late Booker T. McCoy and Louise B. (Bowman) McCoy. She was a graduate of William Penn High School Class of 1941 in Harrisburg. Gin as she was affectionately known by her family and friends, loved cooking, sewing, crochet, knitting, and playing Bingo. She also loved spending time with her family. Carrie retired from The Harrisburg State Hospital. In addition to her parents, Carrie was preceded in death by her husband, William A. Smith, Sr. She leaves to celebrate her life and to cherish precious memories of her, her daughters, Barbara N. (Smith) McKim (Garfield) of York and Elisa M. Smith of Harrisburg; her son, William A. Smith, Jr. (Ruth) of Annville; her sister, Linda C. McCoy of York; her seven grandchildren; her nine great grandchildren; her six great-great grandchildren; and a host of nieces, cousins, and friends. A private graveside service to celebrate her life will be held in Indiantown Gap National Cemetery at the convenience of the family. Arrangements by the Etzweiler Funeral Homes and Cremation Service, 1111 E. Market St. York, PA 17403.

The family of Carrie Virginia McCoy Smith created this Life Tributes page to make it easy to share your memories.