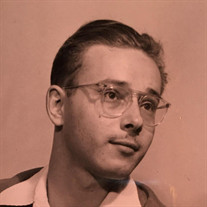 Basil J. Austin, known to friends as Buzz, was born June 6, 1927 in the Bronx, NY to Dr. Mitchell R. and Belle S. Austin (both of whom predeceased him). After graduating from high school, where he participated in the band and more, he matriculated to the University of Virginia. Studies – and participation in the band - were interrupted when he was drafted during WWII. He entered the US Army, served and rose to Sergeant, received a Victory Medal - WWII, and was honorably discharged in 1947. He returned to UVA to finish his studies and at the same time reenlisted. Buzz earned his B.A. from the University of Virginia in 1949. Buzz was also subsequently honorably discharged from the US Air Force in 1950. After college and military service, Buzz became a Certified Public Accountant and practiced for many years in Virginia. It was there that he met his wife, Pearl S. Austin, to whom he was married for over 50 years. Buzz and Pearl had one daughter, Sara A. Austin, of York PA. After a long and successful career in accounting, Buzz retired, then enjoyed doing all types of puzzles – jigsaw, crossword, Sudoku, Crostic, Diagramless, Anacrostic, and more – watching UVA sports on tv and attending UVA football and basketball games, and watching his NY Yankees. A few years after his wife predeceased him, Buzz moved from Virginia to York, PA, to be close to his daughter. After the move, he learned to use GPS to get around his new town; he adjusted to a new city, knowing nobody except his daughter, and even started going to the gym. Buzz also got back in touch with his younger sister, Myrna. They communicated periodically until her death. Buzz was always close to his daughter. They were a father-daughter team to the end. He helped her with homework in elementary and middle school, supported her in high school and college, and enjoyed talking with her about accounting when she took related classes in law school. Buzz always told Sara she could do whatever it was she set her sights on. He taught her how to drive (a stick-shift, so she could drive anything!) and to do basic things around the house for herself so she wouldn’t need to depend on anyone. Buzz was always there for his daughter. They talked on the phone every night except when they went to dinner or the Symphony or did something else they both enjoyed. Buzz left this earth on January 10, 2021. He will be sorely missed. Services with military honors will be held at Indiantown Gap National Cemetery, Annville, PA for family only. Donations in his memory can be made to NPR (National Public Radio) at www.npr.org or to The Nature Conservancy, Attn. Treasury, 4245 N. Fairfax Drive, Suite 100, Arlington, VA 22203. Arrangements by the Etzweiler Funeral Homes and Cremation Service, 1111 E. Market St. York, PA 17403.

Basil J. Austin, known to friends as Buzz, was born June 6, 1927 in the Bronx, NY to Dr. Mitchell R. and Belle S. Austin (both of whom predeceased him). After graduating from high school, where he participated in the band and more, he matriculated... View Obituary & Service Information

The family of Basil "Buzz" J. Austin created this Life Tributes page to make it easy to share your memories.

Send flowers to the Austin family.