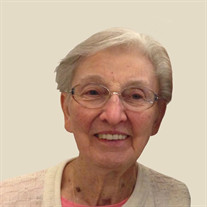 Audrey May Beaverson Crone, wife of Sterling L. Crone, daughter of Clair John and Violet E. Beaverson, and mother of Kathy Eberly, Sandy Murphy, Sue Kucharik, and Marti Sanclemente, died on March 6, 2021 at the age of 87. Audrey was preceded in death by her husband of 68 years, her parents, her brother Lloyd Beaverson, and her sister Deborah Beaverson. She is survived by her daughters, 12 grandchildren, 9 great-grandchildren, and her sisters Violet Deamer, Joanne Brown, and Janet Smith. Born on May 28, 1933, Audrey attended the Glades 2-room Schoolhouse through grade 8, Hannah Penn Junior High School in grade 9, and William Penn High School in grades 10 – 12, graduating in 1951. In high school she was in the National Honor Society and several service organizations. Audrey worked at the York Bank and Trust after high school until 1954. To supplement the household income while she was a stay-at-home mother, she took in laundry and ironing, and did some babysitting in her home. After all of the girls were in school full time in 1968, she returned to work in the business office at Memorial Osteopathic Hospital. She worked there until 1973 when the family moved to Hartleton, PA. From 1973 until she retired in 1995, Audrey worked as a bookkeeping machine operator at the Laurelton Center. In 1987, Audrey and Sterling moved to a log home they built on their Christmas tree farm. She always helped on the tree farm and never failed to have a hot meal prepared for dinner. When her family would visit her, she planned every meal and all of the desserts that she would serve during the visit. When guests would arrive late at night, she would be ready with bedtime snacks. Throughout the visit, she would have the grandchildren and great-grandchildren help her prepare some of the food, like making pancakes, making monkey bread, baking cookies, mashing potatoes, making casseroles, etc. She included the younger ones who would “dump” ingredients into the bowl and the older ones who would stir or run the mixer. She was always patient with them and had hugs and kisses to go around! Audrey lived a life of service to her family, her church, and her community. As a member of Mt. Zion Evangelical Lutheran Church in York, PA, she taught the preschool Sunday School class. She also would help at the Sunday School picnic, baking cakes and pies. As a member of Christ's United Lutheran Church in Millmont, PA she was an usher, a lay reader, an altar server, and helped to serve communion. Audrey was active in the Women's group where she took her turn serving as president and treasurer. Audrey helped to sew quilts for Lutheran World Relief, coordinated and served dinners for a variety of organizations, and baked pies and served meals at the booth the church had at the West End Fair every August. She volunteered at workdays at Camp Mount Luther, the Lutheran Brotherhood (renamed Thrivent), and cooked and served at the Millmont West Union Lions Club dinners. Audrey cared for Sterling though their 68 years of marriage. Even after they were moved to the Memory Care Unit at the Village at Sprenkle Drive, the nurses joked that she should get a paycheck as she cared for Sterling and other people. Services will be held at a later date. Burial will be at Mt. Zion Cemetery. In lieu of flowers, the family suggests that memorial contributions can be made to Mt. Zion Evangelical Lutheran Church, 2164 Mt, Zion Rd, York, PA 17406; Christ's United Lutheran Church, 13765 Old Turnpike Rd., Millmont, PA 17845; or Camp Mount Luther, 355 Mt. Luther Lane, Mifflinburg, PA 17844. Arrangements by the Etzweiler Funeral Homes and Cremation Service, 1111 E. Market St. York, PA 17403.

The family of Audrey May Beaverson Crone created this Life Tributes page to make it easy to share your memories.

Send flowers to the Crone family.