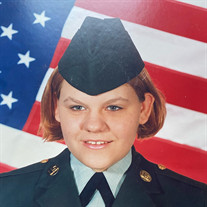 Ariel Marie Moody, 40, died on Wednesday, June 1, 2022 at her residence. Ariel was born in Columbia, PA on September 12, 1981, daughter of Linda (Blymier) Moody of Wrightsville and the late Lawrence “Larry” Thomas Moody. Ariel graduated from York VoTech’s cosmetology program and immediately joined the U.S. Army. She was proud to serve in the Army and serve her country like her father. She was among the first troops sent to Iraq, where she drove supplies to the front line. Before graduation and after being discharged from the Army, she worked at the Accomac Inn. Ariel enjoyed cutting and coloring friends hair. She loved spending time with her nieces and baking. She was also an avid fan of the show Supernatural and their online community. In addition to her mother, she is survived by her son, Kameron David Cochran; step son, Kristofer Cochran; two brothers, James R. Shore and Larry Moody, Jr.; sister in law, Heaven Geiter, and Brittany Rineer. the father of her children, Ryan Cochran; and eight nieces and nephews, Savannah Moody, Ayden Geiter, Elizabelle Shore, Cierra Moody, Abby Shore, Brianna Moody, Leighann Gravly, and Nathaniel Gravly. She was preceded in death by her grandmother, Gertrude Blymier; and her brother, Shaun Moody. Following cremation, a memorial service will be held at 1:00 p.m. on Monday, June 13, 2022 at the Etzweiler Funeral Homes and Cremation Service, 700 Hellam Street, Wrightsville, with full military detail presented by the York County Veterans Honor Guard. A visitation will be held from 12 to 1 p.m. on Monday at the funeral home. Burial will be private at the convenience of the family. Arrangements by the Etzweiler Funeral Homes and Cremation Service, 700 Hellam Street Wrightsville, PA 17368.

The family of Ariel Marie Moody created this Life Tributes page to make it easy to share your memories.

Send flowers to the Moody family.