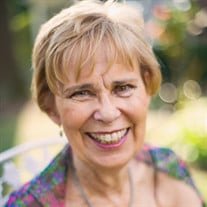 Anne Bruen Cramer Hoover passed from this life on June 3, 2021, at The Memory Care Unit at SpiriTrust Lutheran on Sprenkle Drive. She was the beloved wife of Benjamin A. Hoover II, MD, for 58 years. Born in Mount Holly, NJ on September 12, 1941, to the late J. Elton and Eleanor (Lum) Cramer, she was raised at Meadowbank Farm in Birmingham, NJ. Anne graduated from St Mary’s Hall (now Doane Academy) an Episcopal Prep School in Burlington, NJ, in 1959 and earned a BS in Education from Beaver College (now Arcadia University) in 1963. Dr. and Mrs. Hoover were married on June 22, 1963, and settled in York. She taught 4th grade for York Suburban School District at East York Elementary School for 2 years. When their first child was born, she became a full time mother and a very active volunteer for numerous nonprofits. The family lived in Wurzburg, Germany from July 1967 through August 1970 while Dr. Hoover served in the US Army. There she served as President of the Army Post Nursery School and was active in the German American Club. On returning to York and after the birth of their third child, she set up the first Cardiac Risk Screening Program for The York-Adams Heart Association and ran it as a volunteer for 2 years. She became an active member of the Junior League of York and in 1977 was asked to chair a committee to do a feasibility study to save and restore the Strand and Capitol Theaters. She then served as the first Vice-President of the Board of Directors of the Strand Capital Performing Arts Center from 1978-1981 and President from 1981-1984. Over the next two decades she served many roles with the SCPAC, including setting up the acclaimed ‘Day at the Strand’ program, Director of Educational Outreach, Community Outreach Associate and Director of Group Sales, Interim CEO, and again as Vice President from 2002-2005. She received the Mayor’s Award for Support of the Arts in 1984 and The Founders Award of the Strand Capitol Performing Arts Center in 1994. The Strand Capitol Performing Arts Center (now The Appell Center for The Performing Arts) was indeed her fourth child. Anne was a member of the first class of Leadership York in 1978 and was the first recipient of their Outstanding Alumnus Award in 1999. She was President of the York College Women’s Auxiliary, President of the Junior League of York Sustainers, and Vice President of the York County Community Foundation. Anne also served on the Advisory Boards of WITF and York City Schools Project Connections, as well as the Boards of The Farm and Natural Lands Trust, The York County Council of Churches, York County Medical Society Alliance, York County Visitors Bureau, and York Day Nursery and Kindergarten. For more than two decades she was the elected Judge of Elections for the 4th Ward of Spring Garden Township. In 1987 she was elected the first and only female member of the Board of Directors of The York Bank (now M&T), serving until a merger in 1998. In 2007 she was named an Honorary Member of The Rotary Club of York. Anne was ordained an Elder at The First Presbyterian Church of York. In 2005 she and her husband were the first couple to be awarded The Legion of Honor by The Chapel of the Four Chaplains. Foremost she was a devoted wife, mother, and grandmother survived by her husband, son B. Andrew Hoover III and wife Elinor of Manhattan, NYC, daughter Kathryn (Kate) Barclay and husband Dr. Peter Barclay of York, and son Jonathan Hoover and wife Kirsti of Brooklyn, NY; grandchildren Hannah Bruen, Gavin Abram, and Garth Elias Barclay, and Philip Abram Hoover II; sister Margaret (Maggi) Gizzi and husband Tony of Lewes, DE, brother Christopher Cramer of Southampton, NJ, and a host of nephews, nieces, and cousins. A sister Martha C. Colver predeceased her. Fulfilling her wish, made when her Alzheimer’s disease was mild, Anne’s brain was donated to the University of Maryland Brain and Tissue Bank, The National Institutes of Health sponsored NeuroBioBank Network dedicated to improving the understanding, care, and treatment of individuals with neurological disorders. A Memorial Service will be held in the Sanctuary of First Presbyterian Church of York on Friday, July 2nd, with special music at 10:30 AM and the Service at 11:00 AM. Pastor Allison Beaulieu will be officiating. For those unable to attend in person the service will be streamed live at https://boxcast.tv/view/anne-hoover-memorial-service-531699 In lieu of flowers the family suggests a contribution be made to The Appell Center for the Performing Arts, 50 N. George St., York, 17401, or The First Presbyterian Church of York, 225 E. Market St., York, PA 17403. Arrangements by the Etzweiler Funeral Homes and Cremation Service, 1111 E. Market St. York, PA 17403

Anne Bruen Cramer Hoover passed from this life on June 3, 2021, at The Memory Care Unit at SpiriTrust Lutheran on Sprenkle Drive. She was the beloved wife of Benjamin A. Hoover II, MD, for 58 years. Born in Mount Holly, NJ on September 12, 1941,... View Obituary & Service Information

The family of Anne Bruen Cramer Hoover created this Life Tributes page to make it easy to share your memories.

Send flowers to the Hoover family.